Duel Fuel Generators are back-up generators powered by two different types of fuel either from a single engine or two different engines depending on the size of the generator and the amount of power needed.

This can vary from portable generators powered by a gas cylinder to supply the gas and a fuel tank to hold the diesel to large industrial generators used in hospitals and big office blocks.

They are essential for areas where the gas supply is not always available, but with gas prices increasing every year they are one of the most economical generators you can have in any household or business.

These generators increase the flexibility of supplying emergency power as they run on both gas and diesel using an advanced fuel system, and they are able to operate in many different gas/diesel combinations ranging from 100%/0% to 30%/70%.

The Benefits of Having a Dual Fuel Generator:

Duel fuel generators are suitable for different types of gas such as natural gas, sewage gas and landfill gas.

They are available in fixed or variable diesel gas full combinations and there is diesel assistance to backing up the gas should the system suddenly fail.

The mode is selected automatically depending on the current situation and the automatic switch will change the dual fuel generator to diesel if the gas supply does happen to fail and this happens immediately so the power coverage is not interrupted and continues to run smoothly.

This is the biggest benefit of having one of these generators especially in essential places like hospitals where patients lives may be at risk should there be a major power cut in the area.

In the early days of back-up generators used in commercial and industrial premises dual fuel generators were not an option because the preference was always generators run solely on diesel. These generators were driven by internal combustion engines powered by diesel which had been used for decades. 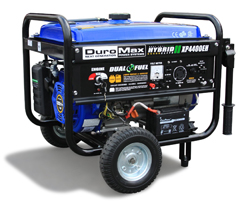 Gasoline is not used in dual fuel generators as it is more volatile than diesel so it is difficult to store, it also has a lower thermal density. Gasoline does not combine well with natural gas which is another reason why it is not used.

Diesel has been used for so long in back-up generators it is renowned for its reliability and provides good back-up power in remote areas where the gas supply can fail, in which case the automatic switch immediately kicks in switching the generator to diesel.

Natural gas has the benefit of a long running time and is more environmentally friendly than diesel which is why dual fuel generators using this combination of natural gas and diesel is better for the environment than a solely run diesel generator.

A popular choice is a generator that burns natural gas and diesel at the same time using a single engine. It starts by using 100% diesel as the pilot fuel and as the built-in control brings in the natural gas, which has a higher temperature than the diesel, the engine will automatically reduce the amount of diesel coming in so the optimal fuel mix is 75% natural gas - 25% diesel when running on full capacity.

So the only point against having a dual fuel generator is the fact that the larger ones are most expensive than those burning just one fuel.

But although your initial outlay may be higher for the generator you are saving money on electricity and fuel storage, you are helping the environment because natural gas has low gas emissions and you are saving fuel storage space.